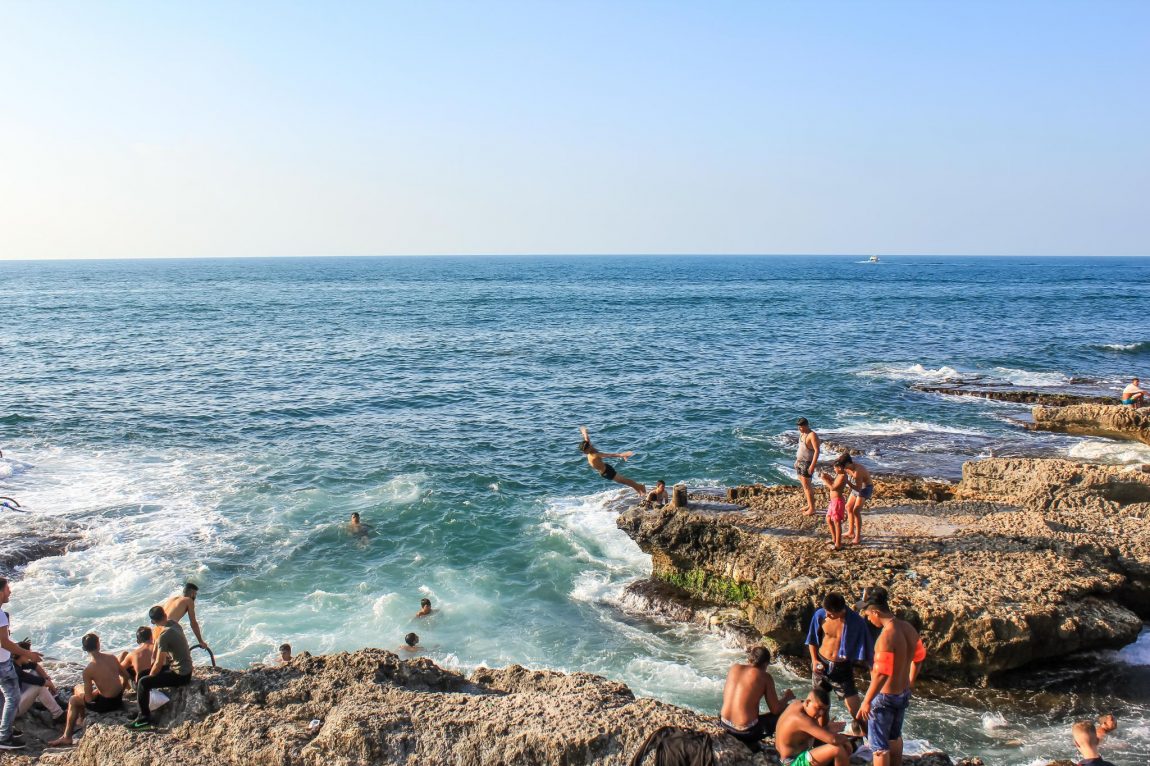 A SUNNY WEEKEND IN BEIRUT

If you read my previous blog post about Beirut here, you already know that the first time I visited Beirut was under pouring rain so obviously not the most exciting way to discover the city!

Thankfully, I had a business trip there last week and extended over the weekend! And this time, it was all bright and sunny!

Since I live in Dubai, the one thing I miss the most is simply walking around. Dubai is not pedestrian friendly at all, distances are huge and there is far more highways than walkways. That is why I was so happy to be in Beirut under nice weather and to just walk around town. 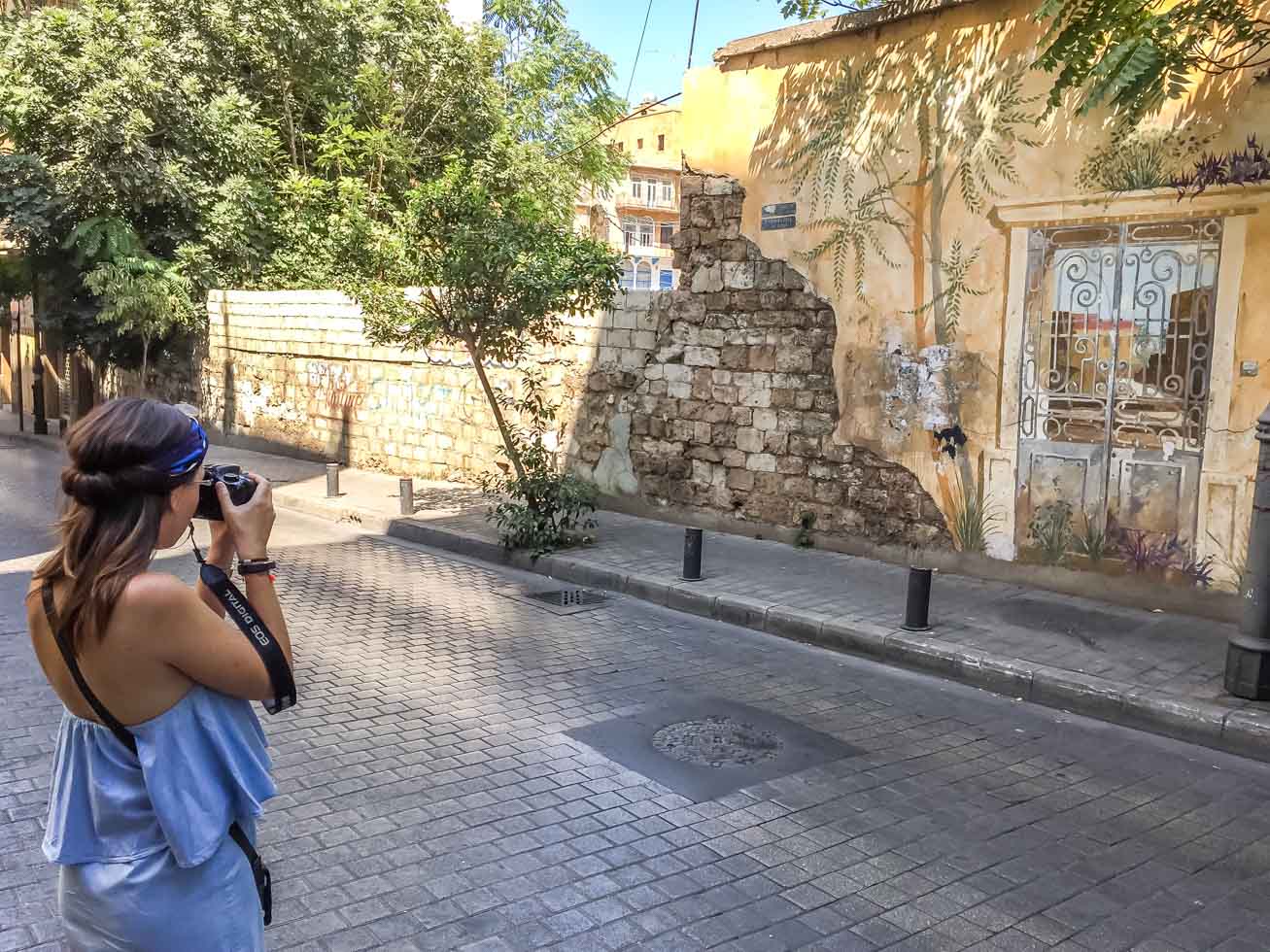 WHAT TO DO IN BEIRUT ?

On the first day, I saved a few locations in Google Maps, and we started randomly walking from one point to the next! From the hotel , we started with Saifi Village. 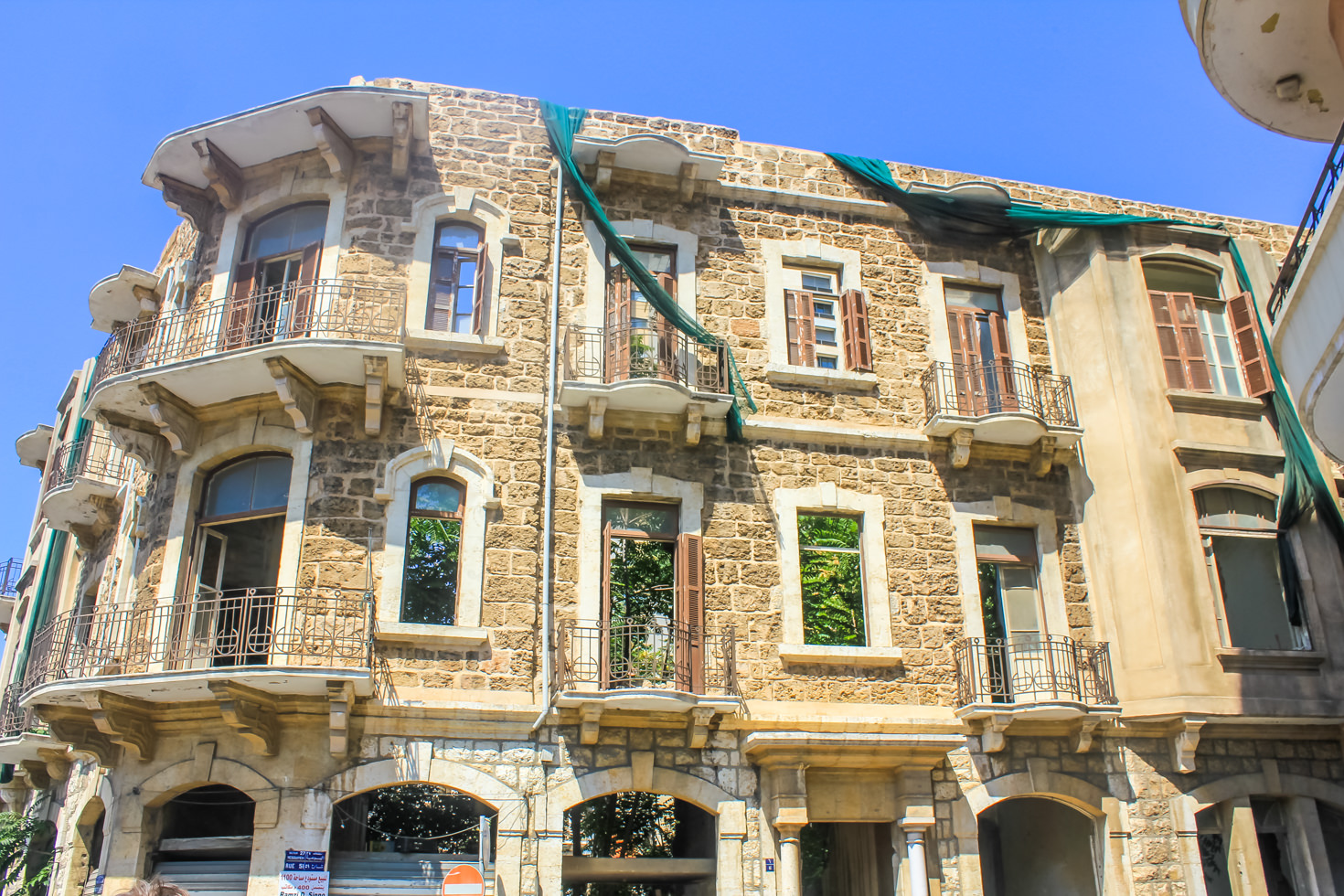 Saifi Village is a central neighbourhood of Beirut which was largely destroyed during the war, and later fully rebuilt in a modern, colourful and upscale residential area. Thanks to its numerous art galleries and designer shops, the area is sometimes referred to as the Quartier Des Arts, the Art District. Unfortunately, we were there on Eid Al Adha week end, so everything was closed. Still, it is a very nice and peaceful area to walk around. 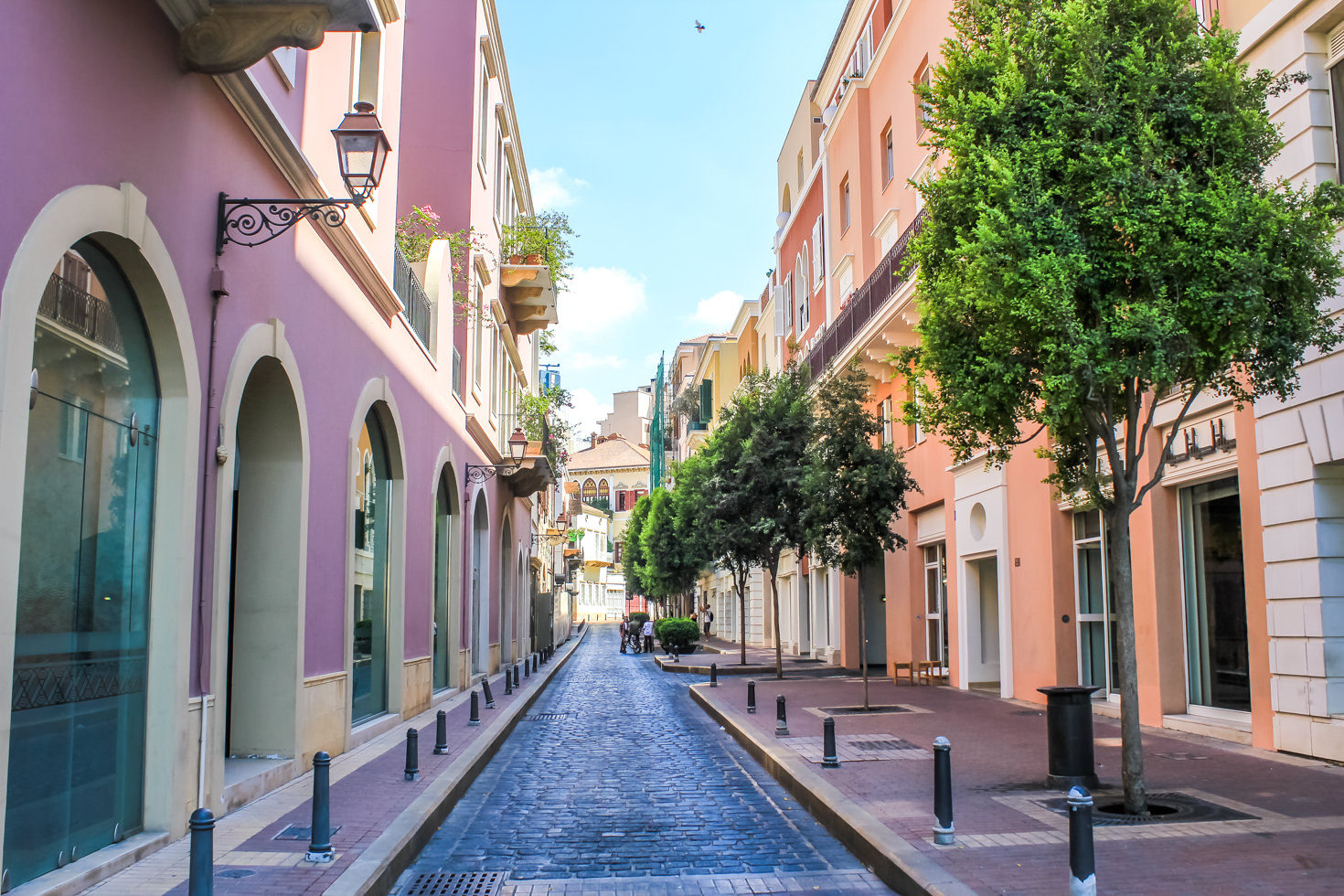 From there, we headed towards the amazing Mohammad Al- Amin Mosque! I am quite a big fan of mosques, which I find to be spectacular forms of architecture, and this one, with its Ottoman inspiration and beautiful blue dome is no exception. 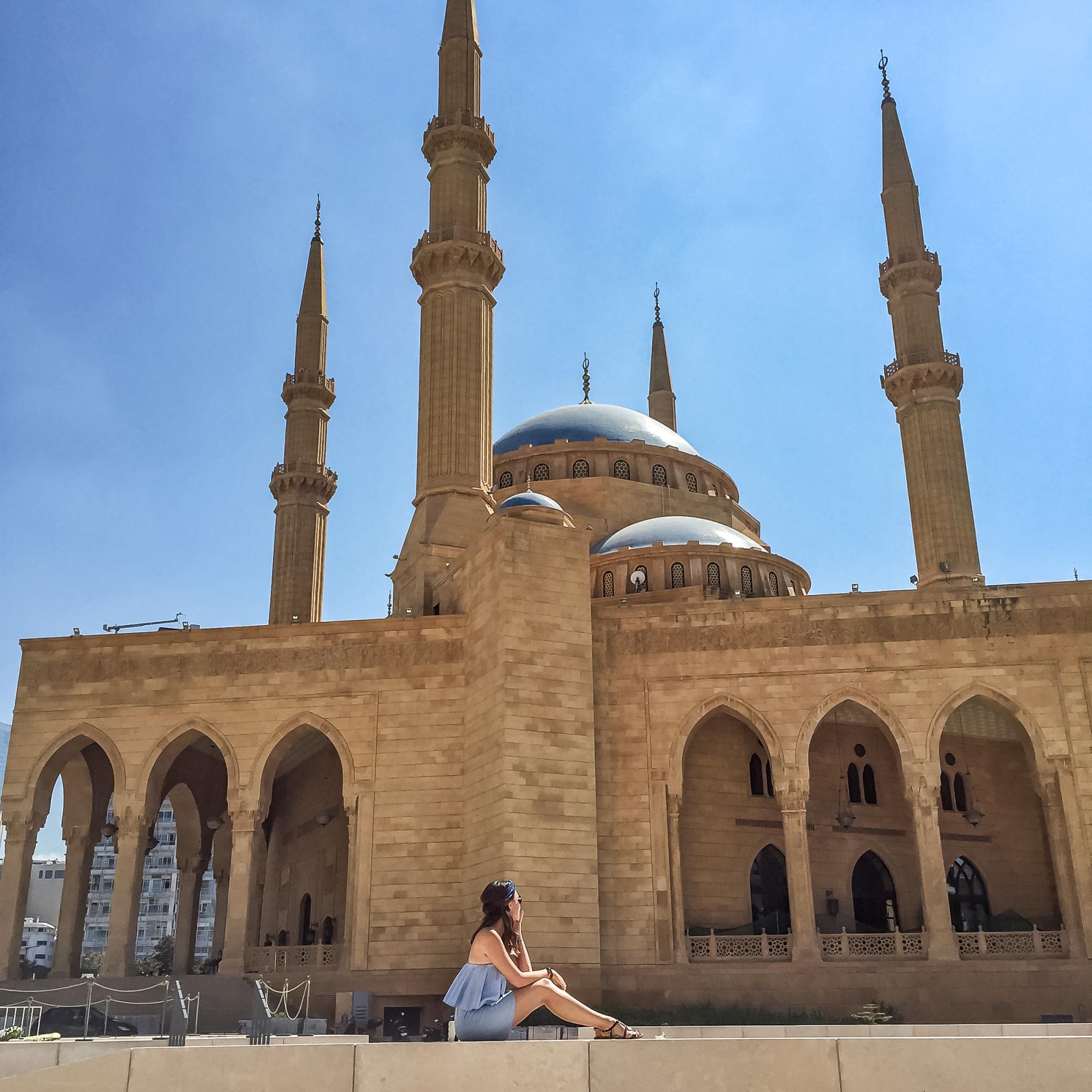 We then headed off towards Zaitunay Bay walking through downtown Beirut, and the “Souk” (which is just a brand new commercial gallery really!). Zaitunay Bay is a really pretty boardwalk lined up by fancy yachts on one side, cafes and restaurants on the other side. It is quite a relaxed area, just steps away from busy downtown Beirut and nested below street level. This is where we decided to stop for lunch, literally starving! 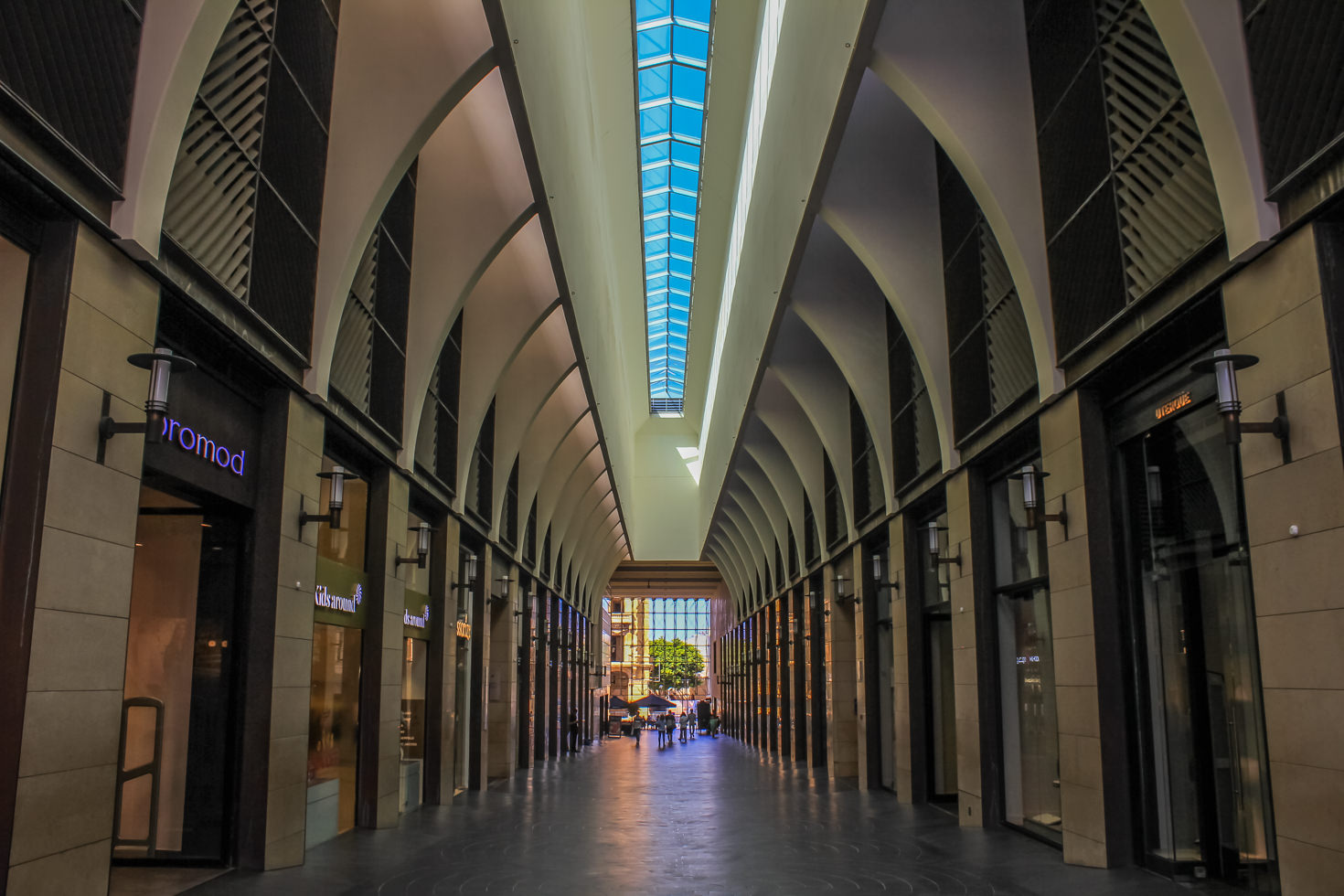 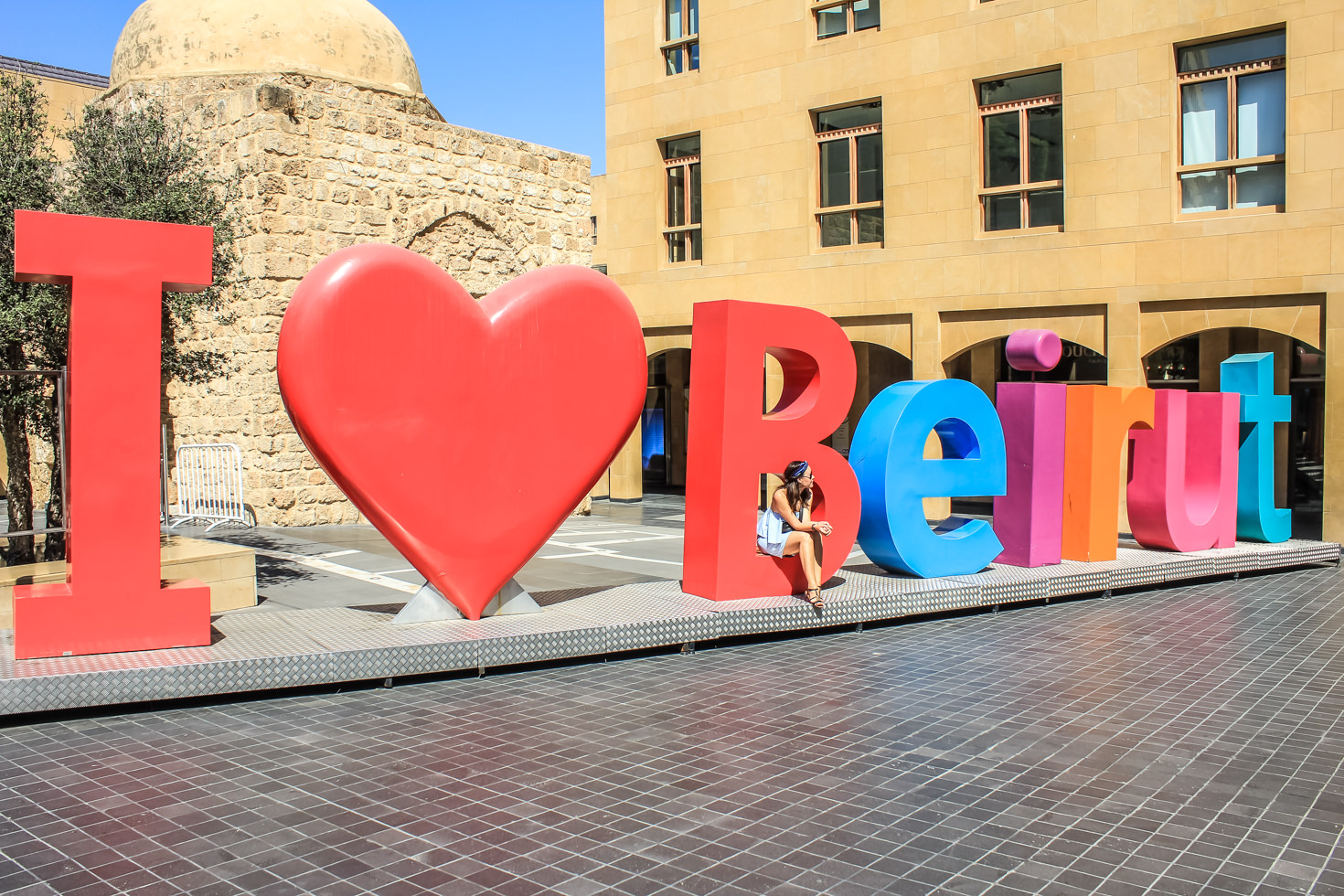 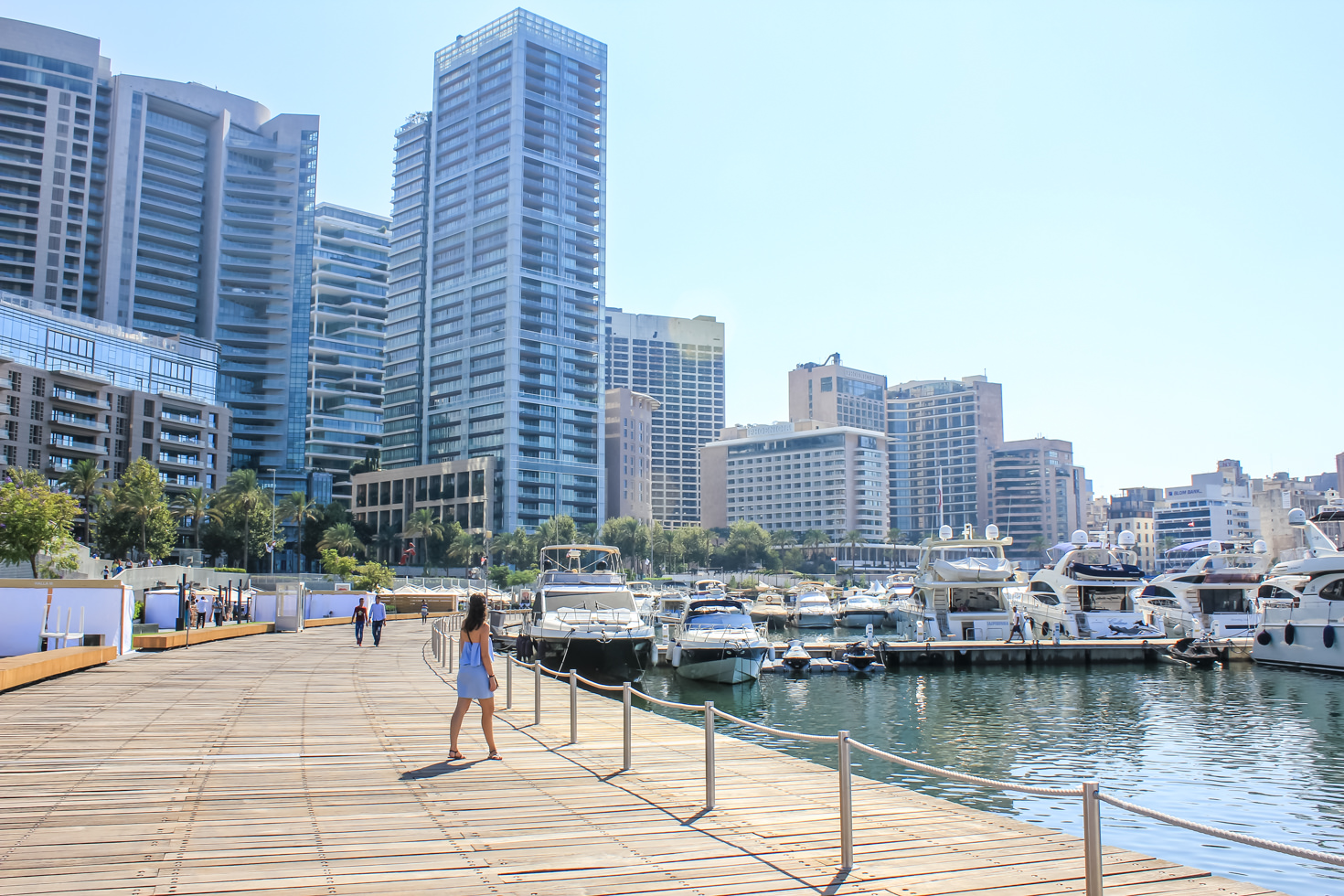 A classic Lebanon lunch and a shisha later, we headed toward the Promenade for the final leg of our walk of the day! My feet started to seriously hurt but the weather was so beautiful, it was impossible not to enjoy. Because it was Eid holiday (I assume), the Promenade was completely packed, with young teenagers and families, just

chilling around, and dipping in the sea, which made the walk very cheerful! 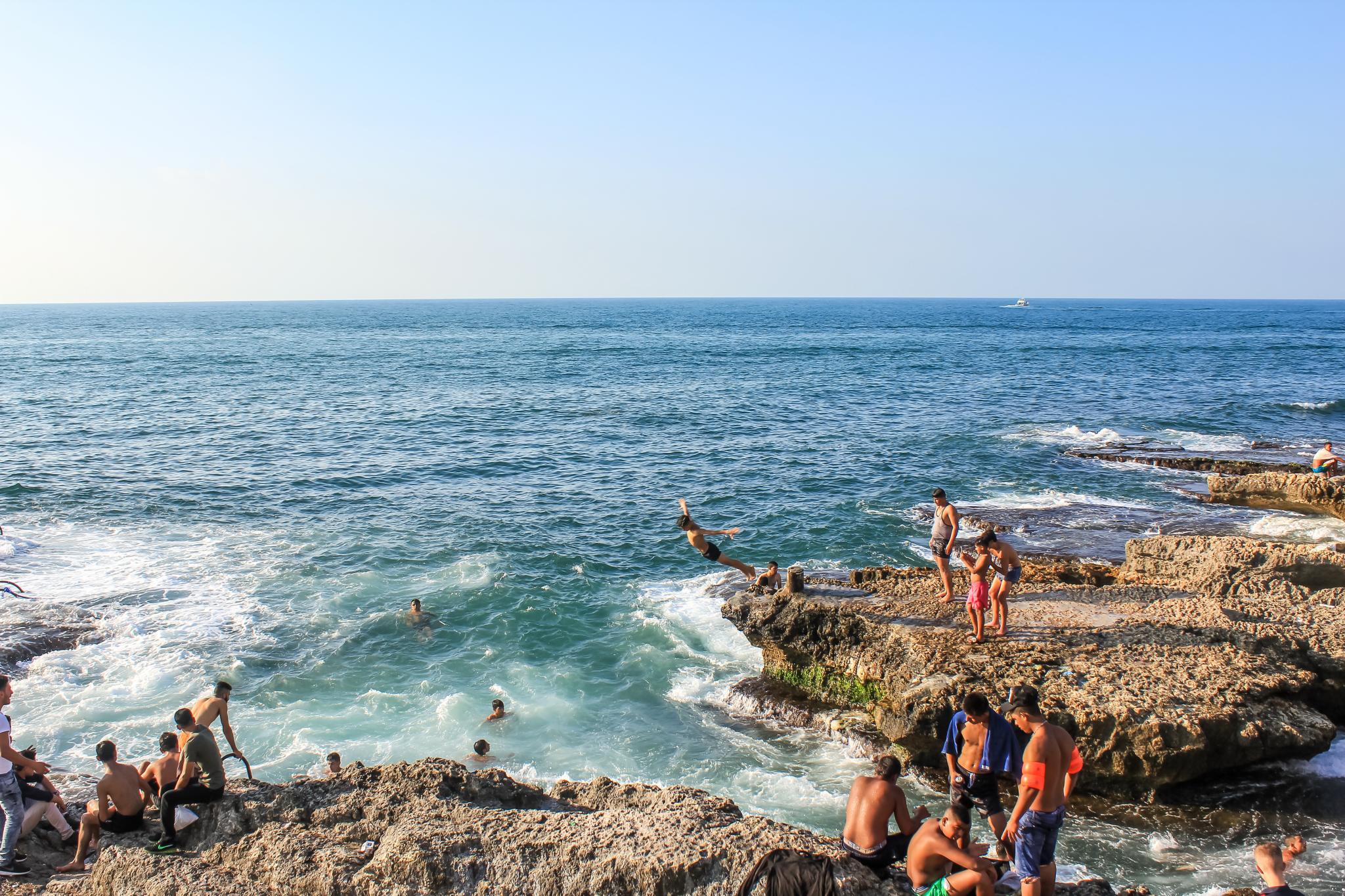 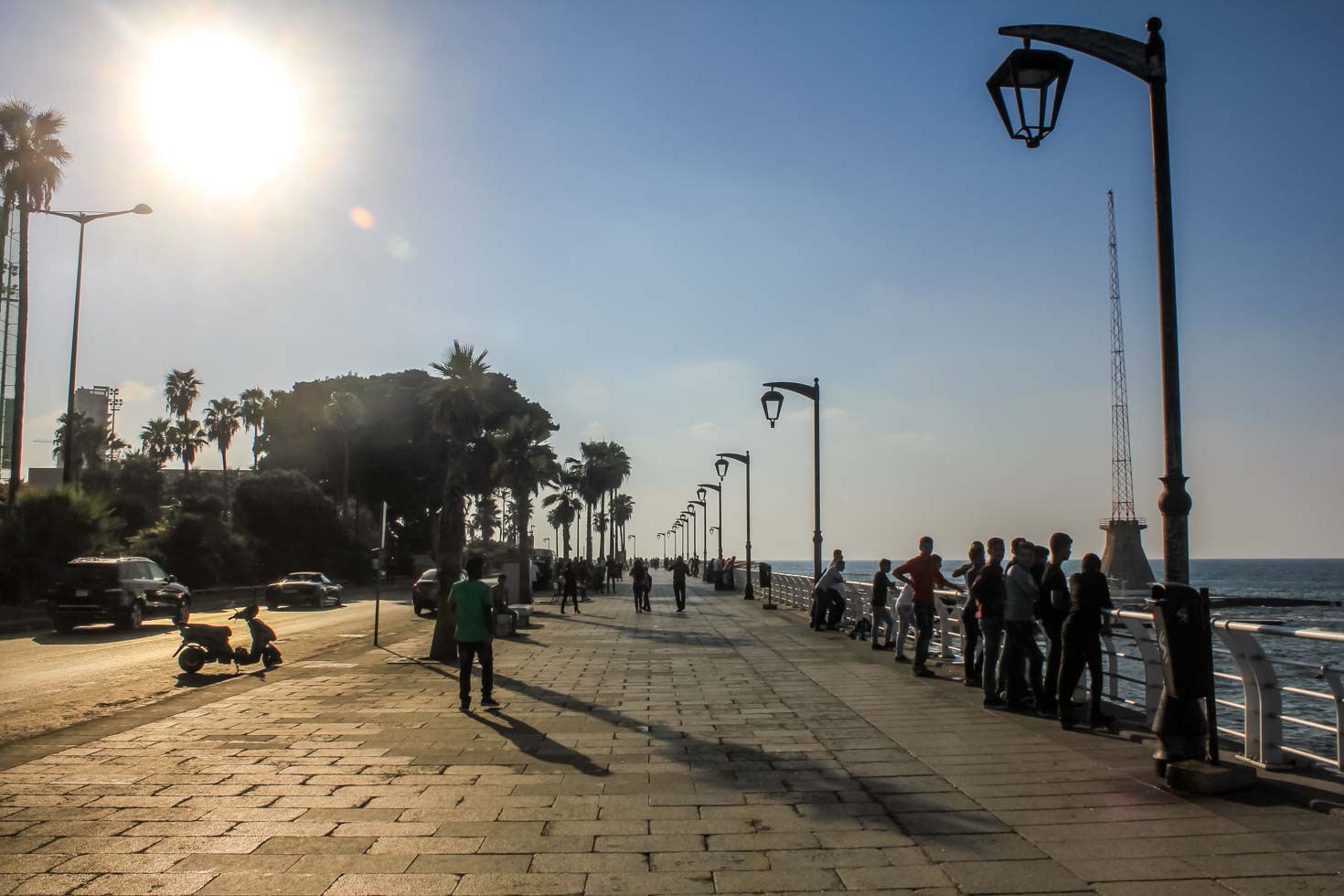 The next day was fully dedicated to eating, drinking and chilling .. Sorry for the never stopping explorers our there, but I do love a good day off under the sun! I was trying to find a good beach club but soon realised there is no real beach in Beirut. You need to drive a while out of the city to find proper ones. So I settled for the infamous Riviera … I was really not too keen to go there, as most of the reviews described the place as overly showy, with load music, plastic barbies and oiled up men, but somehow it still seemed to be the best option ! And eventually I was relatively positively surprised. We took some loungers away from the main pool area, facing the sea, and after lunch and a bottle of rose, everything was better !! 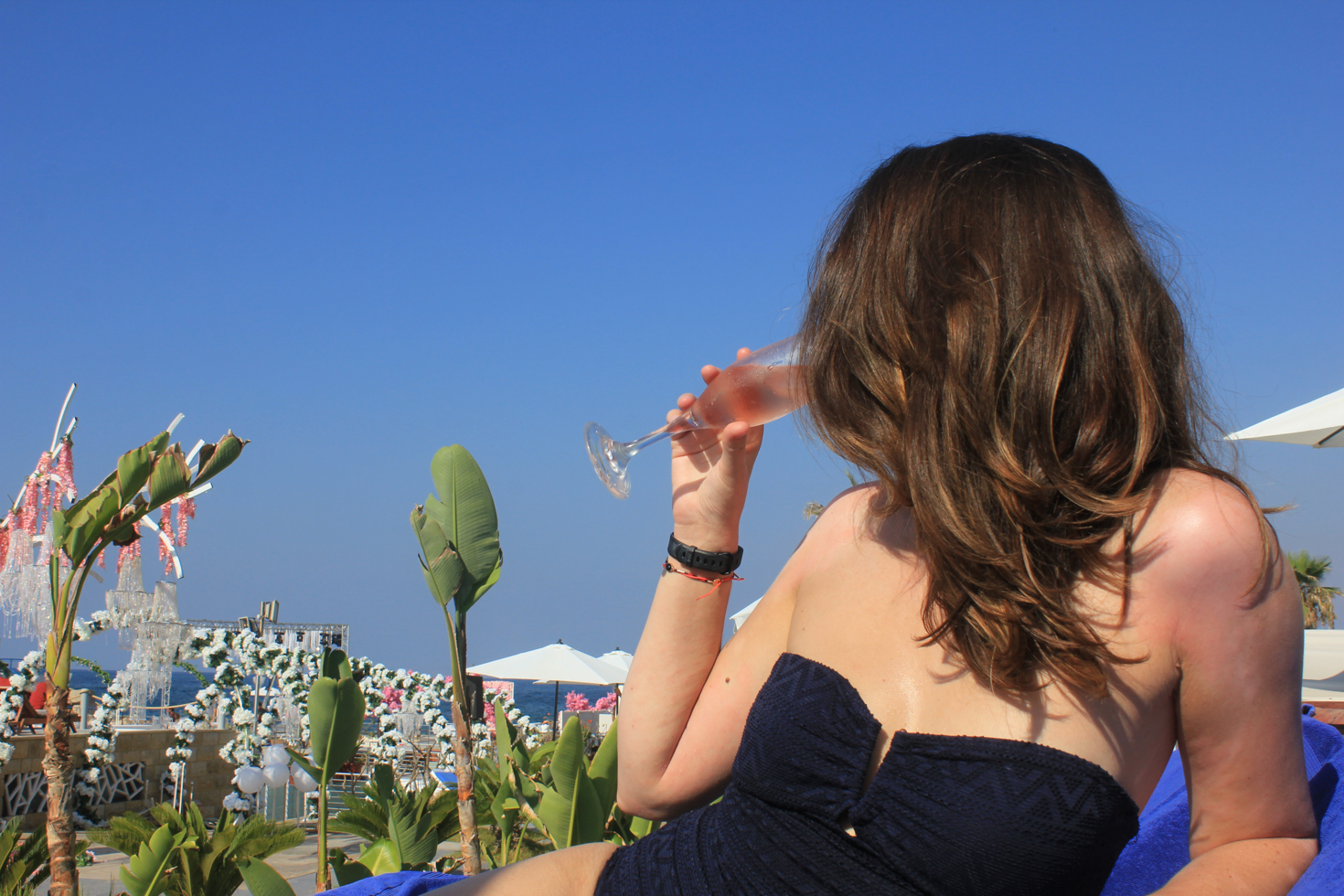 WHERE TO EAT, DRINK AND SMOKE SHISHAS IN BEIRUT ?

As mentioned below, we stopped for lunch in Zaitunay Bay. We looked at all the places and eventually settled for Laila. Laila is a Lebanese mid range chain with outlets across the ME. I already tried it in Beirut and in Doha, and I knew it was a safe bet. We had a couple of mezzeh : Labneh (a thick kind of yoghurt, to eat with hot bread) and fried cheese rolls (my favourites, I could live off these !), a delicious eggplant salad (Salatet El Raheb – also one of my favourites, I just can’t figure out how it is done!) and some grilled chicken Taouk. And of course, we had 2 shishas! Other things that you should try : Kebbeh (some kind of meatballs) and Sawdet Djeij (chicken liver in a sweet grenade molasses sauce) and a mix grilled platter of course.

A small lunch like ours, will set you back 35 USD (excl. shishas), which is really reasonable for tasty Lebanese food. If you are looking for something more fancy I would recommended Liza in Achrafieh. I haven’t tried it yet, but it looks stunning and it is on my list for my next trip to Beirut.

After the above mentioned lunch (that we had at 4pm), I was not quite ready to go for dinner, but my other half had to be fed (#rollingeyes). Apparently on holidays 3 meals / day is non-negotiable for him, while I can easily skip one (just not breakfast … never skip breakfast !)

But I was up for a drink (always am!) so we chose a wine bar that will make us both happy : CRU, in Hamra. This wine bar has (as you would expect!) a very good wine selection but since we are simple people (or are we?) we went for the house wine, specially produced for CRU, which was surprisingly good. We also ordered a cheese and a cold cut platter (HEAVEN coming from Dubai, trust me!) Both were good, but not as varied and qualitative as I would have hoped for. But overall we had a good night! By the way, I should probably mention this is a non smoking restaurant, which is a treat for the non smokers.

This place is such an awesome discovery ! On our first night in Beirut, we walked to Rue Monot, to find a simple place for dinner, drink and shishas. At the corner of Damascus Road the first place we checked out was Al Falamanki and I immediately loved it.

The outdoor is like a large garden, with comfortable (and very kitsch) old school sofas, armchairs, and a mix of low coffee tables and more regular dinner tables. The decoration is very eclectic and colourful, and it has a very homey feeling. We had some beers, shishas and Lebanese snacks …I might or might not have had a delicious Nutella crepe …. I really love this place and we came back for more on our last day before flying back to Dubai.

HOW TO GET TO BEIRUT

Keep in mind that flying with Middle East Airlines will be about an hour shorter than the other airlines as the flight takes a direct route, while Emirates and Fly Dubai take a detour to avoid flying over Syria. 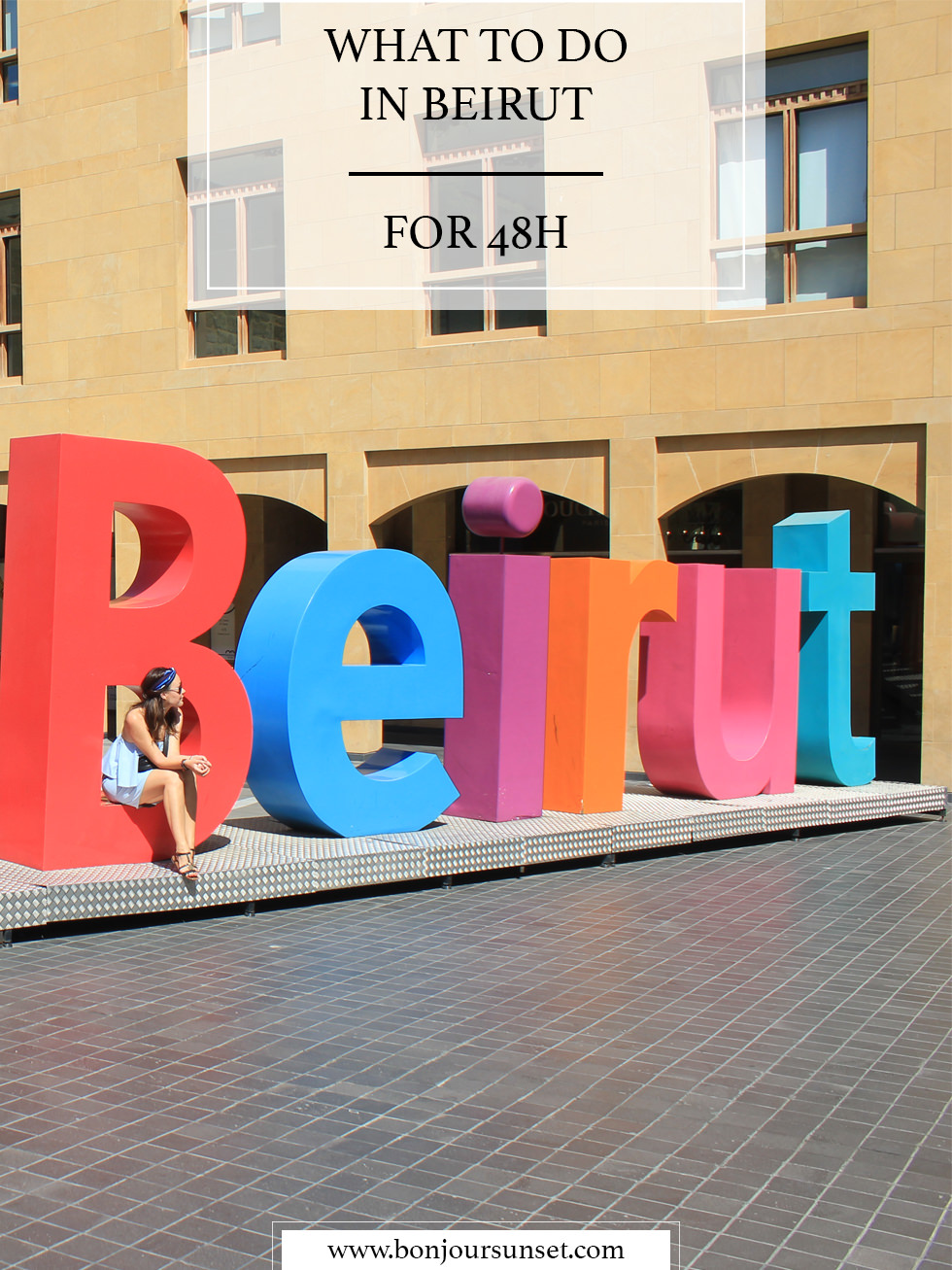 10 THINGS YOU SHOULD KNOW ABOUT DUBAI

WHAT TO WEAR IN IRAN? A COMPLETE GUIDE TO IRAN DRESS CODE

A FIRST WEEK END IN BEIRUT !

AN ESSENTIAL GUIDE TO PAROS, GREECE